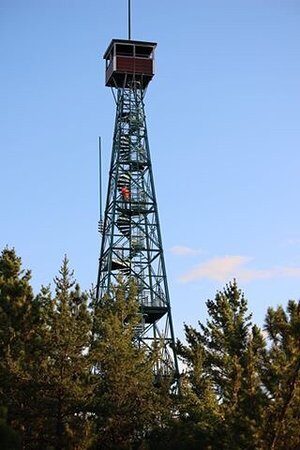 On August 9, 1998 the newly restored Temagami Fire Tower was opened and dedicated to the Ministry of Natural Resources’ Forest Rangers.  The aerial view shows the two viewing platforms, one with a replica of the cupola on top of the tower, for those that don’t like heights.  There is also an Interpretive Centre located close to the parking lot, which houses information about the Forest Rangers.

The original tower was erected just a few metres to the east of the present site on Caribou Mountain in 1910.  It was built of square timber design and was 45 feet high.  In the late 1930’s this tower was demolished and a new 85 foot light steel tower erected.  Due to rusting, this tower was demolished and sent over the side of the cliff face in 1961.   With the old 85 foot tower removed, a 100 foot high steel tower was erected the same year by seven Forest Rangers.  There were nine towers in the area manned by Forest Rangers with field glasses, a detailed map and an alidade and azimuth, to pinpoint the exact location of a fire.  The Temagami Fire Tower was last used 25 years ago to spot fires and for the past 47 years has been a part of Temagami’s skyline, greeting the sunrise each morning