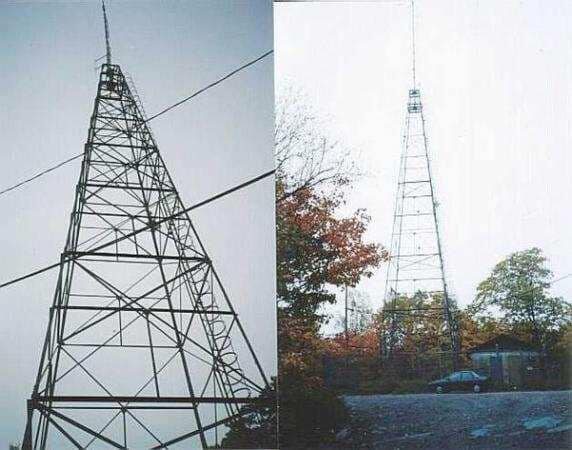 This was located on Tower Rd. just east of North Bay. The tower was first built in the 1920s as a light steel tower and was run by Mary Kennedy in the 1950s. In the 1959 it was dismantled and a taller 100 foot heavy steel tower was erected in its place. This tower had a larger square cupola. It was used until about 1970 until aerial forest fire techniques were employed to detect fires. Its cupola was removed.

Through much research it was determined that the Widdifield Fire Tower in North Bay was the one used. The old crew from the show were unable to recall the location but when my friend Gary and I drove up to the site it was confirmed that indeed this was the tower. The cupola has been removed and this tower is now used as a radio tower near the airport. This was the main reason I started my Ontario’s Fire Towers site (I wanted to find this very tower. To read about my search for this tower and the time and hard work I had to put in to determining that this was the tower go to my “Joe Tower” link .

The photos below are from the tv show itself. One is the distant winter shot through the trees and the other shows Michael Zenon (Joe) climbing up the tower in the sub-zero temperature to nab the killer.

The tower is now used as a communications hub.