This is the last standing Fire Tower in Algonquin Park, and until 2011 it was fully intact. Lightning struck the wooden shelter atop the tower in May 2011 and it subsequently burned the entire structure. Only the metal tower is left standing and charred wood can be found at the base of the tower. The lower section of the ladder can be found tossed over the cliff's edge about 100m west of the tower. You can enjoy a beautiful view from those cliffs.

Fire towers were the primary tool in the fight against forest fire in Algonquin Park until they were entirely phased out by the use of aircraft for this same purpose. 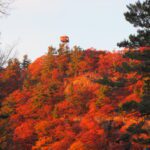